The thirty or so participants were joined by a further twenty in the global Clean4Change waste collection initiative.

At 9 o'clock sharp, around thirty people gathered at the SARFA bus station to take part in the global Clean4Change 2022 campaign, consisting of a waste collection in the natural environment. About 30 volunteers, to which were added during the course of the cleaning action, about twenty more rosinques and rosinques who "have been divided into three groups to carry out the collection in the three streams, the Riera Ginjolers, the Riera de la Cuana and the Riera de la Rota," said the councillor for the Environment, Francesc Giner.

This global initiative was organised in Roses by TOMRA Recycling Sorting, a subsidiary of a Norwegian company based in the town, "which aims to lead the revolution of resources, so that as they are obtained they are processed and reused as efficiently as possible, and within this mission we are delighted to participate in this global movement of Clean4Change to promote social partnerships to collect rubbish from the natural environment," explained the director of TOMRA in Roses, explained the director of TOMRA in Roses, Judit Jansana , who, together with other workers from the company, handed out bags and gloves, provided by Roses Town Council, to the volunteers, most of whom came from organisations such as the Roses Athletics Club, the Cabirols Hiking Association and the Roses Zero Plastics Association, as well as the Port of Roses.

The latter organised an additional cleaning of the part of the Quana stream that flows into the sea. Six divers removed a large amount of rubbish from the water, such as car tyres, cables, chairs, iron, plastics and several aluminium cans. Each of these debris is certainly a reminder of how important it is to dispose of our waste properly.

It is worth noting that the waste collected from the three streams also included two microwaves and a sofa.

The rubbish collection carried out in the Riera Ginjolers, the Riera de la Cuana (land and sea) and the Riera de la Rota was carried out over two hours, during which time fifty people took part and collected, according to the calculation made by the company TOMRA, around 500 kg of rubbish. Once the cleaning action was over, the participants were called to the marina car park where the same company rewarded them with a succulent breakfast, gave them reusable bags and a snack bag for the little ones.

This was not the only waste clean-up action organised by TOMRA in Roses, as during this week it will be carrying out others with the town's primary and secondary schools to raise awareness among young people of the importance of keeping our natural environment clean. 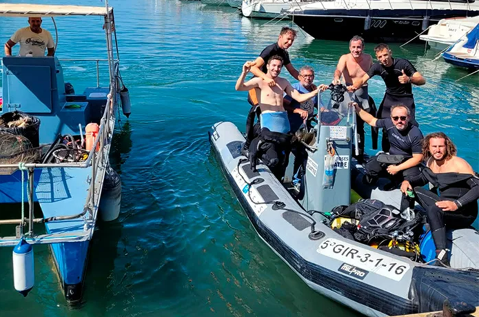