Nautical competitions return to the Costa Brava in 2022.

The Costa Brava is once again hosting top-level sailing competitions with the 32nd Palamós Optimist Trophy-16 Nations Cup regatta, which takes place from 17th to 20th February and features 500 participants from 26 countries.

Nautical competitions return to the Costa Brava in 2022.

The Costa Brava is once again hosting top-level sailing competitions with the 32nd Palamós Optimist Trophy-16 Nations Cup regatta, which takes place from 17th to 20th February and features 500 participants from 26 countries.

The cooperation between the organisation and the Club de Vela Palamós - Club Nàutic Costa Brava, the GEN Roses, the Club Nàutic l'Escala, the Club de Vela La Ballena Alegre and the Club de Vela Blanes is aimed at promoting the facilities and services of the clubs, as well as highlighting the area's natural, cultural and gastronomic attractions and resources to sportspeople and their companions. The Costa Brava's nautical offer will soon be marketed to sports clubs and specialised travel agencies in the south of France and the United Kingdom, and at the same time a digital campaign will be launched to publicise this new content.

The Costa Brava is currently positioned as an ideal nautical and sports tourism destination for training and competition trips in the numerous sailing modalities and disciplines that exist. Nautical activity in Girona's coastal towns and villages generates economic and social dynamism for the area, contributing to the deseasonalisation and promotion of the Costa Brava. It is estimated that the expenditure generated by a sailor or participant in a competition is around 100 euros/day. According to the study carried out by the Palamós Sailing Club - Costa Brava Yacht Club, the direct economic impact of the stays of sailors and accompanying persons in Palamós in international competitions amounts to 1.3 million euros for activities organised directly by the club. Also, according to data from the Club de Vela La Ballena Alegre, the estimated economic impact generated by the international PWA and F18 regattas in 2019 amounts to 2.1 million euros.

From February until 2023, the calendar of international events that the destination will host includes competitions such as the Escala International Weta Regatta, the Palamós Christmas Race, the Windba Costa Brava Spring Cup, the International Windsurfer European 2022 and the Hobie 16 World Championship, all three in La Ballena Alegre in Sant Pere Pescador. Also scheduled are the Spanish Windsurfer Cup, the Catalan Competition Plank and IQ Foil Championships at Club de Vela Blanes, and the Spanish fast slalom windsurfing and Catalan slalom championships at GEN Roses. In 2023 the Optimist World Championship 2023 will come to La Ballena Alegre.

The Costa Brava Tourist Board's Sports Tourism Marketing Club brings together around fifty companies and organisations specialising in sports tourism and related to accommodation and facilities, incoming agencies, event organisers, municipalities and other service companies. The aim is to structure the offer, promote it and market it. The initiative is open to all sporting disciplines practised in the territory, although it focuses on the most important ones, such as cycling (in all its forms), football, triathlon, swimming, running, athletics, water sports, tennis, rowing, canoeing and team sports. 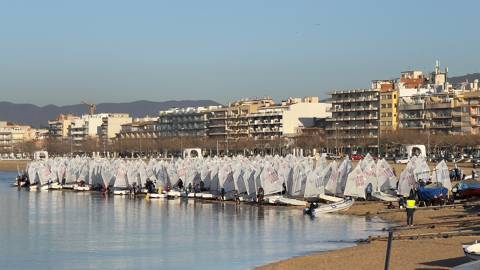